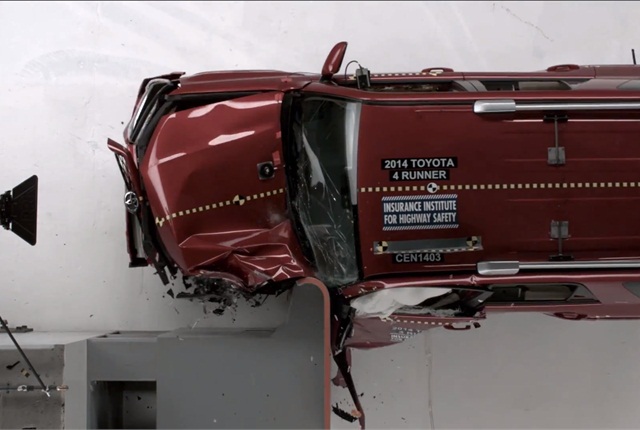 In small overlap front crash tests, the Chevrolet Equinox and its twin, the GMC Terrain, are the only 2014 model-year midsize SUVs out of nine evaluated to earn a “good” overall rating, the Insurance Institute for Highway Safety announced.

For a video summary of the test results, click on the photo or link above.

Because they bucked the trend and scored “good” overall ratings in the test, the Equinox and the Terrain qualify for IIHS’s highest award for 2014 -- Top Safety Pick+. The Toyota Highlander, whose “acceptable” small overlap rating was announced in December, also qualifies. The award is given to vehicles with a “good” or “acceptable” small overlap rating, “good” ratings in four other occupant protection tests, and a rating of “basic” or higher for front crash prevention.

IIHS noted that its small overlap front crash test continues to challenge manufacturers more than a year and a half after its introduction.

"SUVs have gotten much safer over the past few generations, but some are better than others at providing comprehensive front crash protection," said David Zuby, IIHS executive vice president and chief research officer. "When it comes to midsize SUVs, General Motors is showing the way forward. The Equinox and Terrain score well in all components of the small overlap test — structure, restraints and kinematics, and injury measures for four body regions."

The small overlap test replicates what happens when the front corner of a vehicle collides with another vehicle or an object such as a tree or utility pole. In the test, 25 percent of a vehicle's front end on the driver's side strikes a rigid barrier at 40 mph.

For more details about the test results, click here.