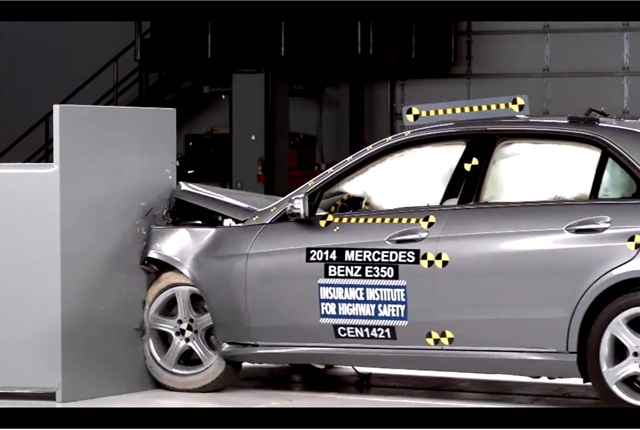 The 2014 model-year Mercedes-Benz E-Class, a large luxury car, has drawn the Top Safety Pick+ award from the Insurance Institute for Highway Safety.

Beginning with 2014 models manufactured after January, Mercedes strengthened the footwell area of the occupant compartment to improve protection in small overlap front crashes. These changes apply to the four-door E-Class models.

In the small overlap test, the driver's space was maintained well, IIHS said. The test indicated a low level of risk for major head and chest injuries during a collision of this type.

“The dummy's head was reasonably controlled by the frontal airbag, but it rotated around and hit the vehicle's A-pillar because the head and torso moved too far forward," IIHS said. "The side curtain airbag deployed to protect the head from contact with other side structures. Despite the head contact, risk of significant injuries to the head and chest was low.”

IIHS added the small overlap evaluation to its testing lineup in 2012. In the crash, 25 percent of a vehicle's front end on the driver side strikes a 5-foot-tall rigid barrier at 40 miles per hour. The test replicates what happens when the front corner of a vehicle strikes another vehicle or object like a tree or a utility pole.

The E-Class is the fourth large luxury car to earn the institute's highest award for 2014. To qualify for Top Safety Pick+, a vehicle must earn a “good” or “acceptable” rating for small overlap protection, a “good” rating in the other four IIHS tests, and a “basic,” “advanced” or “superior” rating for front crash prevention.

To view IIHS crash test footage, click on the photo or link just below the headline.