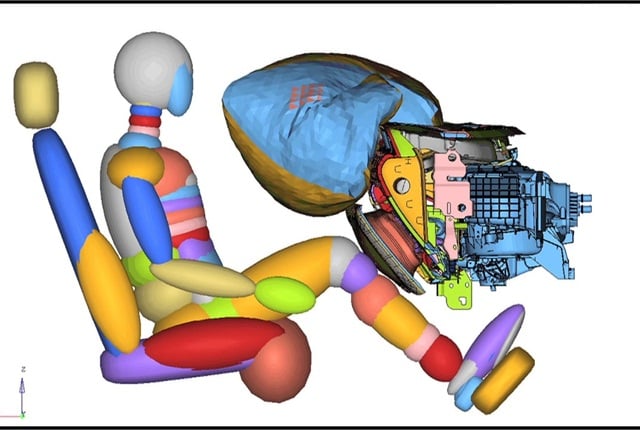 Ford’s upcoming 2015 model-year Mustang will introduce a new inflatable airbag restraint design that provides the front-seat passenger knee protection. Because this airbag is lighter and more compact, it permits a roomier interior for added comfort, the automaker said.

The new airbag has been granted 15 patents and more are pending.

The all-new 2015 Mustang features twice as many airbags, twice as many peripheral crash sensors, and additional pretensioning safety belt technology compared to the outgoing model.

The new airbag design features an inflatable plastic bladder integrated into the glovebox door. This provides the front passenger with knee protection similar to a conventional knee airbag mounted under the instrument panel. The technology allows airbags to be placed in new locations inside the vehicle, providing vehicle designers with more creative options.

After the crash sensor system detects a collision, an inflator fills the bladder and extends the entire glovebox outer door panel toward the front passenger’s legs. Once deployed, the outer door helps to provide cushioning comparable to a traditional knee airbag.

To watch a brief Ford-produced animated video demonstrating the airbag's deployment, click on the photo or link above.

Since the glovebox-integrated airbag extends straight out from the instrument panel, it doesn’t have to travel as far as a conventional airbag that deploys toward the floor before curving upward. The glovebox door distributes the impact load over a larger area than a traditional airbag, so it can operate at a lower inflation pressure, Ford said.

The resulting design is 65 percent lighter. But the inflator, approximately 75 percent smaller than a conventional knee airbag inflator, still offers comparable protection to the passenger. The system’s improved packaging is also more discreet, with no visible seams or airbag cover. This has given designers more flexibility to move the dashboard closer to the windshield, enhancing the feeling of roominess in the cabin, the automaker said.