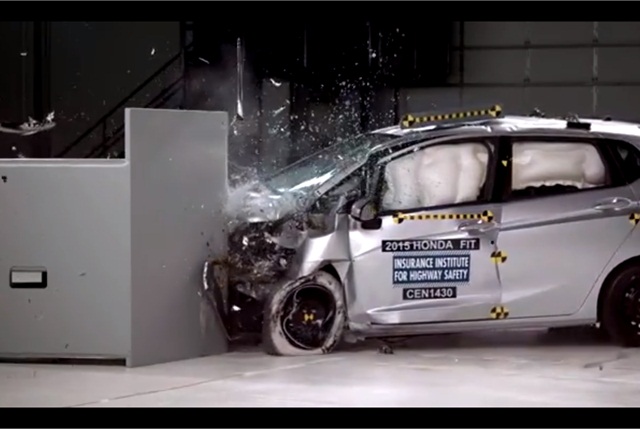 The subcompact car earned an “acceptable” rating in the challenging IIHS small overlap test -- a significant improvement over the 2009-13 model, which was rated “poor.” With “good” ratings in the four other IIHS crash tests, the vehicle qualified for the Top Safety Pick award.

IIHS said it conducted two small overlap tests of the new Fit. In the first test, the bumper beam, a steel bar located behind the plastic bumper cover, broke free of the frame rail on the passenger side early in the crash. This caused much more of the crash energy to be absorbed by the driver side of the car, resulting in extensive intrusion into the occupant compartment and excessive upward movement of the steering column.

In response to that initial test, Honda engineers improved the strength of the bumper beam welds, and the company asked IIHS to test the car again. In the second test with the improved welds, the bumper beam stayed attached to the frame rail. Intrusion into the occupant compartment was reduced, and the steering column was much more stable, resulting in an “acceptable” rating, IIHS said. The rating applies to vehicles built after June 2014.

Honda will initiate a "product update" to replace the bumper beams on approximately 12,000 2015 Fits that were sold earlier this year, prior to the change to the bumper welds. Owners will be notified by mail, and dealers will do the work free of charge. This modification will significantly improve protection in small overlap crashes, IIHS said. Only cars with the replacement bumper beam earned the “acceptable” rating in the small overlap test and qualify for the Top Safety Pick designation.

"We commend Honda for its quick response to the test and for taking the additional step of replacing the bumper beams on early-production vehicles," said IIHS President Adrian Lund. "People who bought cars produced earlier in the year should take advantage of this free replacement to improve protection in small overlap crashes."

IIHS introduced the small overlap evaluation in 2012. In the test, 25 percent of a vehicle's front end on the driver side strikes a rigid barrier at 40 mph. The crash replicates what happens when the front corner of a vehicle collides with another vehicle or an object such as a tree or utility pole.

To watch video footage of the car's small overlap test, click on the photo or link under the headline.