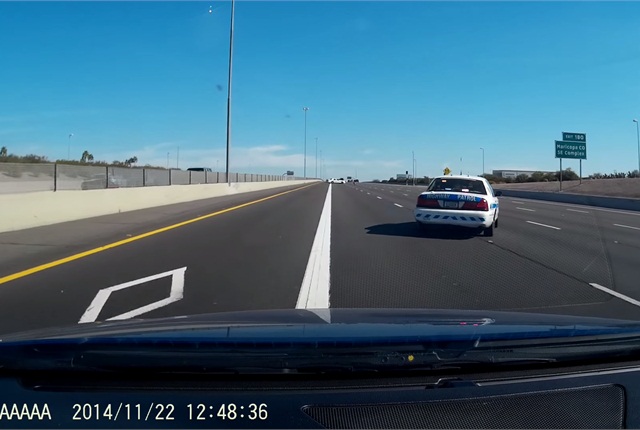 VIDEO: A Near-Collision During a Traffic Break

There are times when law enforcement officers need to quickly slow down the pace of traffic on a highway because of an upcoming driving hazard. Maybe there’s a thick patch of fog around the bend. Maybe, because a truck’s cargo wasn’t properly secured, a dining room set now occupies two of the lanes ahead and road workers are busy moving the furniture out of the way. Or perhaps the upcoming hazard involves police emergency operations.

In such scenarios an officer may execute a "traffic break," driving across multiple lanes of traffic in a snake-like manner with the rear emergency lights on. The driving maneuver, also called a "rolling road block," is intended to instantly slow down multiple lanes of traffic behind the patrol car. Unfortunately, nearby drivers sometimes become confused and aren't sure what to do.

In the video above, you'll see what can go wrong during a traffic break. The patrol car is nearly rear-ended. (You can view the video by clicking on the photo or link below the headline.)

According to the California Department of Motor Vehicles, a motorist should take these steps when encountering a traffic break:

You may want to pass these tips along to fleet drivers as a friendly reminder. It's not every day that you encounter a traffic break. But it's crucial to respond in a quick, decisive manner on the rare occasions when you do and proceed with extreme caution.