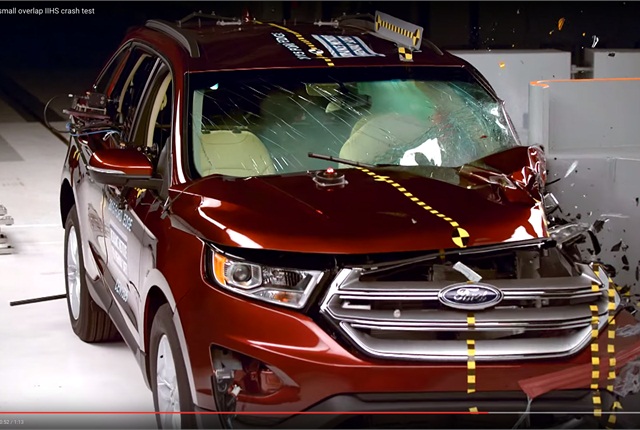 This is the first time IIHS has evaluated the Edge in the small overlap front test. Like the previous generation of the Edge, the 2015 model earned the highest possible score – “good” – for occupant protection in the moderate overlap front, side, roof strength and head restraint evaluations.

Ford reinforced the door-hinge pillar on models built after May of this year to improve occupant protection in small overlap front crashes. The change paid off.

“The driver space held up reasonably well in the small overlap test, with maximum intrusion of 5 inches in the driver’s seating space measured at the upper hinge pillar,” IIHS said. “The dummy’s movement was reasonably controlled.”

The dummy’s head was largely protected by the frontal and side curtain air bags, IIHS said, but the safety belt allowed the head and torso to move too far forward toward the intruding A-pillar.

Measures taken from the dummy indicated a “low risk of any significant injuries in a crash of this severity,” IIHS noted.

To qualify for a 2015 Top Safety Pick, vehicles must earn “good” ratings in the moderate overlap front, side, roof strength and head restraint tests, plus a “good” or “acceptable” rating in the small overlap test.

For Top Safety Pick+ status, vehicles also need an available front crash system with an “advanced” or “superior” rating. The Edge doesn't qualify for the "plus" award because it lacks a front crash prevention system equipped with automatic braking, IIHS said.

IIHS plans to raise the bar to earn a 2016 Top Safety Pick, requiring a “good” small overlap rating. Vehicles with an “acceptable” rating, such as the Edge, will need further improvements to qualify for the 2016 honor, IIHS said.

To view video footage from the small overlap front crash test, click on the photo or link below the headline.