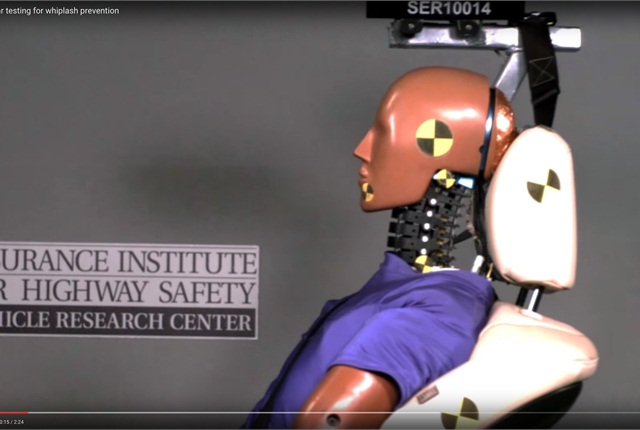 The study, released by IIHS and the Highway Loss Data Institute, concluded that top-rated restraint combinations markedly reduce the likelihood that someone will sustain neck injuries if rear-ended by another vehicle.

The study also underscored the dramatic improvement in such restraint quality in today’s vehicles. A decade ago, IIHS said, more than half of the seat/head restraints the institute evaluated were rated “poor” and just 9 percent drew a “good” score. In contrast, 95 percent of 2015 models earned a “good” rating and none were rated “poor.” IIHS credited its own ratings program, combined with stricter federal requirements for higher front-seat head restraints, for the overall improvement in such occupant protection.

IIHS rates such vehicle restraints as “good,” “acceptable,” “marginal,” or “poor” based on both front-seat head restraint geometry and test results. (To learn more about these test methods, click on the photo or link below the headline to watch an IIHS video from 2013.)

In the U.S., whiplash injuries are the most frequently reported type of injury resulting from crashes.

For the recent study, researchers used an insurance claim database of more than 600,000 rear-impact crashes to assess the likelihood of an associated injury claim. IIHS and HLDI based study results on 2001-2014 model-year cars and SUVs using property damage liability and personal injury protection claims.

Females are believed to be at a higher risk for neck injuries because of several physical differences, the study noted.