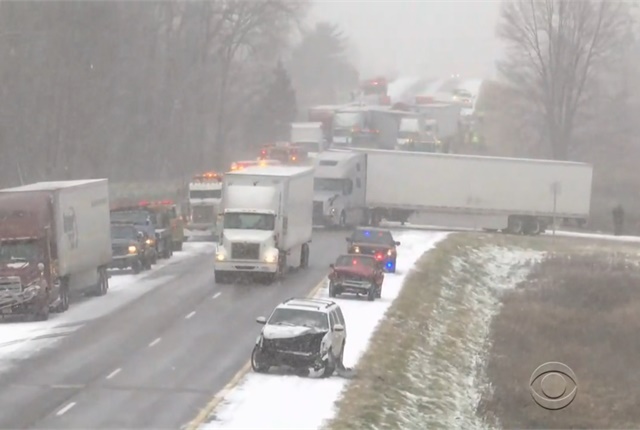 Driving in winter storm conditions, when roads are slick and visibility is limited, isn’t easy. But imagine what it must be like for drivers of heavy-duty commercial trucks.

Sharing the road safely with large trucks always requires taking certain precautions. For example, you need to give large trucks more space when passing because they can’t slow down or stop as quickly as a light-duty vehicle. During inclement weather, these extra measures are even more critical.

(To view a news report involving a worst-case scenario for truck drivers — one that occurred last week in storm-ravaged Michigan — click on the photo or link below the headline.)

Here are four mistakes fleet drivers need to avoid when driving around large trucks, regardless of the weather, according to the California Department of Motor Vehicles:

Lingering alongside a truck when passing. Always pass a large truck on the left side, and after you pass the truck, move ahead of it. Don’t linger. Otherwise, you make it very difficult, if not impossible, for the trucker to take evasive action if an obstacle appears in the road ahead.

Following too closely or tailgating. When you follow so closely behind a truck that you cannot see the truck driver’s side view mirrors, the trucker cannot see you and has no way of knowing you are there. Tailgating a truck, or any vehicle, is dangerous because you take away your own cushion of safety if the vehicle in front of you stops quickly.

Cutting off a truck in traffic or on the highway to reach an exit or turn. Cutting into the open space in front of a truck is dangerous. Trying to beat a truck through a single-lane construction zone, for example, removes the truck driver’s cushion of safety and places you and others in danger. Slow down and take your turn entering the construction zone. Don’t speed up to pass a truck so you can exit the roadway. Take a moment to slow down and exit behind a truck — it will only take you a few extra seconds.