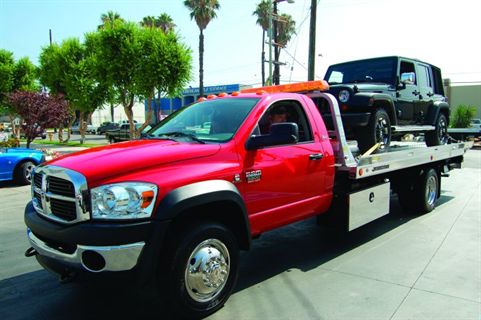 Two years ago Dodge elbowed its way back into the commercial market with the 2007 Dodge Ram 3500 Chassis Cab. Last year, it expanded into Classes 4 and 5 with the introduction of the 2008 Dodge Ram 4500/5500 Chassis Cabs.

Dodge is back in the heavy-duty work truck segment in a big way. So how do these new trucks stack up in the real world?

A year ago BF put a 2008 Dodge Ram 5500 regular cab 4x4 with a Reading dump bed body in the hands of a real fleet user ("Getting the Truck out of Dodge," Nov/Dec 07). For this go-around, Dodge gave us the same model but with a tow package: a 19-foot Jerr-Dan aluminum flatbed rollback and wheel lift.

We went straight to the experts for our truck workout: Jeff Littman of Century Towing and Steve Heller of Howard Sommers Towing, both of the San Fernando Valley in Los Angeles. We met both at Heller's workplace.

Littman and Heller's businesses are at opposite ends of the towing spectrum. Littman transports highline vehicles for private clients such as actors, sports figures and musicians. Working in an official police garage, the majority of Heller's tows are "nonconsensual." Whereas Littman needs to treat each vehicle like fine china, Heller is involved with wrecks, repos and police tows in which speed is of the essence.

Both have towed vehicles hundreds of thousands of miles, so they had lots to say about the truck and their needs.

The 2008 Dodge Ram 4500 and 5500 models are powered by a 6.7-liter Cummins Turbo Diesel (305 hp, 610 lb.-ft. of torque) with a six-speed automatic transmission, diesel exhaust brakes and a standard 52-gallon rear fuel tank. Our tester came with an optional 22-gallon midship fuel tank.

The press vehicle came with the SLT trim and was equipped with creature comforts and bells and whistles that impress editors but make true truck users see "more stuff to fix."

Hence our tow testers said they could do without the optional GPS navigation system and premium cloth seat upgrade. However, Heller found the electric adjustable mirrors to be a great benefit when backing up.

Littman liked the easy-to-read instrument panel and found the controls easy to get to. The floor-mounted control box that runs the PTO may be a nuisance, Heller said, when a third passenger needs to ride in the cab. Heller has a new Ram 5500 on order; he'll ask Jerr-Dan to mount the control box beneath the dash.

Heller said the capacity of the two armrest storage areas as well as the ample storage behind the seat had the competitors beat.

Moving around back to the tow deck, our testers were impressed with the "maintenance-free" bed, owing to Jerr-Dan's new greaseless slidepads.

Littman pointed out how the wires and hydraulic lines are enclosed in the rail, a big improvement over the sock container that would get twisted and shredded with the constant up-and-down motion of the bed.

The deck is made of aluminum. Heller prefers a steel deck for durability and to handle his nasty jobs such as pulling mangled wrecks across it. An aluminum deck is lighter, allowing the weight savings to be donated to the Gross Vehicle Weight Rating (GVWR). This deck could be protected with skates, or the tire tread area could be reinforced with steel plates, Heller said. 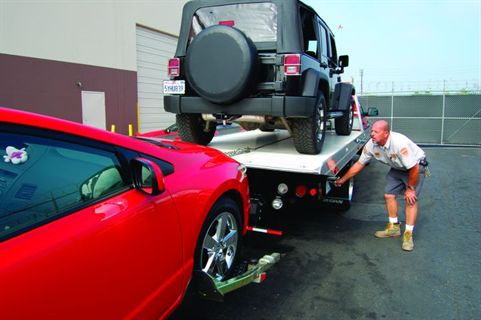 Our towers decided to load a Jeep Wrangler on the flatbed and hook a Honda Civic onto the wheel lift. Both loaded cleanly.

Both towers thought the truck was pushing its maximum weight (19,500 GVWR) with both the Civic and the Jeep loaded. BF reached Brad Pugh, product planner for the Ram Chassis Cab. Pugh said after extensive testing Dodge maintains that the bed can safely handle a midsize SUV such as a Dodge Durango while the wheel lift can tow a large sedan such as a Chrysler 300C at the same time.

Pugh said user feedback with the rollback application revealed some spring sag, which made the vehicle appear to be loaded heavier than it was. To address this, Dodge is now giving away a rear suspension lift kit for free.

Littman revved up the truck with only the Jeep Wrangler loaded on the flatbed to take it for a spin around the San Fernando Valley. The truck really shone on the road.

Littman gave it a few hard stops and was impressed with the braking, aided by the exhaust brake and tow-haul function, which automatically retard speed for safety and to save brake life. The 4500/5500 models also have the largest brake rotors in their classes. "With the exhaust brake and overdrive combination the stopping feels really good," he said.

Heller anticipates his new Dodge will extend brake life by 10,000 miles. He is also expecting better fuel economy in the new truck.

Littman took the truck into a parking lot to test the turning radius. Pugh said Dodge pushed the axle out 6 inches and maximized the wheel cut to about 45 degrees. Littman's conclusion: "Really tight. That's really nice for a flatbed."

"It drives very similarly to a one-ton pickup," Littman said.

Our test operators saw this chassis cab/tow package configuration as ideal for a specific niche such as city tows or moving cars in an airport. Heller is ordering his Ram 5500 with just the wheel lift and not the flatbed.

Pugh at Dodge says the Dodge Ram 5500 with the rollback wrecker presents a good value proposition for the tower with in-town jobs who doesn't need to step up to, and pay for, a Class 6 truck.

"The truck itself rocks," Littman says, referencing the truck's power, stopping ability and turning radius. "I haven't messed with a Dodge truck in years, but this one's great," he says. bf