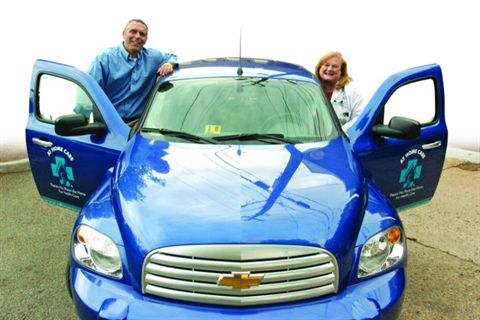 In June the IRS announced an 8-cent increase in the optional standard mileage rate from 50.5 cents per mile for business miles driven to 58.5 cents a mile through Dec. 31, 2008.

Even small fleets that reimburse at the IRS rate are being hit hard. Multiplying the 8-cent increase by 30 vehicles that drive 12,000 miles per year adds about $30,000 per year in fleet expense.

Even before the IRS increase, sky-high fuel bills were a major reason these two home healthcare providers moved to a managed fleet program from reimbursement. In so doing, they are saving substantial costs by switching to more fuel-efficient vehicles and using a fleet fuel card, while experiencing benefits not immediately visible on the bottom line.

Enterprise Fleet Management analyzed the FMS fleet and determined that the company could save about $100,000 a year by switching from reimbursement to leased vehicles. The figures were based on an estimated 80 drivers who average 15,000 to 20,000 miles per year and included factors such as miles driven, maintenance, insurance, lease terms and monthly payments, as well as having a fleet of uniformly fuel-efficient vehicles.

"We provided the mileage by employee category and they did all the calculations, showing us the break-even point and what the savings to the company would be," says Lawrence Leahy, vice president of finance.

Today Leahy is looking to further expand his fleet and change fleet models to save fuel expense. The company began leasing mid-sized sedans and has decided to switch to the more fuel-efficient Ford Focus.

At the end of the month, the fleet department receives one report that tracks all fuel purchases. The reports help Leahy monitor possible driver abuse of the cards, such as use of higher octane gas. The cards also record mileage, which helps monitor maintenance and repairs.

AT Home Care providers drive an average of 25,000 miles per year, so the increase in the IRS rate represented a substantial expense spike, says Carrie Dorsey, director of public relations.

AT Home Care is also moving to more fuel-efficient vehicles, switching from the Chevy HHR to the Chevy Aveo hatchback. The company is including OnStar service as an added perk.

Because the lease payments are less than the 58 cents-per-mile IRS reimbursement rate, the company plans to increase the managed fleet to 50 vehicles in the coming months. Dorsey estimates these moves will save the company about $55,000 per year.

AT Home Care clinicians use a fuel card as well. Dorsey says that not only is the actual gas reimbursement expense lower with the cards, the time involved reviewing receipts and processing the resulting paperwork is cut down considerably.

Dorsey of AT Home Care agrees. "The car we offer has been a nice perk for employees. "Not only is it a hiring incentive, but employee retention has been much higher. These are the soft benefits you don't necessarily see in the bottom line."

The employees, with some minor limitations, can use the vehicle for personal driving, and can even use the fuel card for personal use.

Leahy reports that two of his company drivers were recently involved in separate accidents. Enterprise handled everything, he says. "They got the loaner cars, and the cars were repaired in a timely manner," he says.

"They take the fleet management responsibilities out of your hands," he says. "They send me invoices on the fuel usage, if somebody's behind on their maintenance schedule or if the mileage is going over the original lease. They keep me posted pretty well on a regular basis."

With less paperwork to sort through, companies have more time to focus on their core business.

When going to reimbursement, fleet administrators can take satisfaction that some employees' less-fuel-efficient vehicles are off the road. Going further, Dorsey says her company is thinking about signing with a new Enterprise carbon emission offset program that is currently in development.

"That's a nice feel-good benefit that the employees will be part of, and something our company feels strongly about," she says.

A well-maintained company-owned fleet can help reduce lost revenue due to missed appointments when employees' own vehicles break down and are out of service.

Dorsey says the company places its logo on the company cars, which is not possible with an employee-owned car. The branding is essentially free advertising.

Logo or not, companies with employees driving newer vehicles as part of a managed fleet program represent the company image in a much more positive light than would an older employee-owned clunker. BF