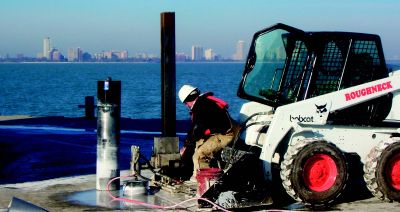 In Roughneck's line of work, you'd think Mike Rowe of Discovery Channel's "Dirty Jobs" would be lurking around the corner with a camera.

To no one's surprise, Roughneck's fleet of 25 Ford E350 vans works a severe-duty cycle to get the work done. The fleet transports workers, equipment and trailers from the office to job sites, on average 60-mile routes a day. The company performs about 20 jobs at a time.

Through the years, the company has implemented maintenance procedures, vehicle upgrades and driver controls to reduce breakdowns and ensure the fleet's long life, says company President Karen Johnson. Even in this severe-duty environment, the vans are expected to run 12-15 years.

A few years ago Johnson decided to switch from gas to diesel powerplants for longer engine life. (However, Ford is not producing a diesel engine for the next generation of E350.)

The vans tow generators and water tanks, and regularly run close to maximum payload with heavy equipment such as drills, saws, vacuums, extra motors and tools. Roughneck vans use a 4:10 gear ratio to ease the workload on the drivetrain. To accommodate the extra weight, Roughneck's in-house mechanics adjust the camber angle on the front end and install a heavier leaf spring in the rear.

Not satisfied with commercial aftermarket or even OEM upfits, Roughneck designs, builds and installs its own shelving for the vans. The shelves are custom fit for every vehicle and are made of thick angle iron bolted into the van. The shelving regularly outlasts the life of the van and can be transferred to a new unit if necessary. A bulkhead is installed between the cab and the cargo area. The black rubber floor mat is replaced with diamond plate.

The company maintains two full-time and two part-time mechanics on staff. That may seem like overkill for a fleet of 25 vehicles, yet the foursome work not only on the vans but on the myriad pieces of construction equipment, from specialized drills, saws, Bobcats and trailers on down to the tool bits. One mechanic is trained in concrete cutting and is in the field as needed.

Roughneck has a fleet number and factory orders. The company has a longstanding relationship with Piemonte Automotive Group, a multi-franchise fleet dealer serving the Midwest.

Remarketing the vans is a bit of an afterthought. "When I'm done with them they're not worth much," Johnson admits. However, retired vans are valued for parts, and the company keeps a couple on hand for that reason.

The Beauty of Fleet Maintenance

The mechanics follow manufacturers' maintenance schedules and take it a step further with their own preventive maintenance procedures. "Sometimes going by the book isn't enough," says mechanic Brian Nichols.

With such heavy-duty usage, oil is changed every 3,000 miles, less than the manufacturer's recommendation, as are fuel filters. Dusty work sites require air filters to be replaced on a stricter schedule as well. "It's mandated by the type of work we do," says Nichols.

Slurry-the liquid byproduct from concrete cutting-is incredibly corrosive. Upon returning to the lot each day, trucks and trailers are inspected and cleaned thoroughly, often blasted with a power washer. Clean trucks are also essential to company image. "It's our storefront as well," Nichols says.

All maintenance records are logged meticulously. "Recordkeeping is the best way to locate a pattern of problems on a piece of equipment or a van," says Johnson. "You make a plan so all the other vans don't follow the same path."

The mechanics keep track of part numbers, which comes in handy particularly when a truck is broken down. Instead of waiting for a costly tow, mechanics will bring the new part to the breakdown and fix the problem on the side of the road.

Charting the history of parts breakdowns allows for preventive steps to be taken before the next problem. "That's the beauty of fleet maintenance," says Nichols. "When a belt tensioner goes bad, you know to look at the other ones and change the part before it fails. The school of hard knocks teaches you well."

The downturn in the economy has led to an uptick in theft. "We've had vans stolen in broad daylight from a parking lot," says Johnson. "One truck was even stolen out of a driveway."

Johnson installed a GPS tracking system in the vans. The system locates the stolen vehicle, though by that time it's often stripped clean. The company goes further by installing an electronic kill switch and steering column lock. "I've had at least two times where people have tried to take the vans and were unsuccessful," she says.

The GPS system is also used to promote driver safety by reporting infractions such as speeding and dangerous driving.

The company maintains a written driving program in which drivers sign off on policies and procedures. Motor vehicle records are checked; each driver must be pre-approved by the insurance company. Roughneck holds regular safety meetings.

Each driver is assigned to his own van for accountability. "If their truck is failing repeatedly, we can ask them what's going on," Nichols says.

For the company's efforts, Roughneck has not only won numerous safety awards, but has also kept accidents and breakdowns in check throughout the company's long history.

The business was started in 1956 by Johnson's father, Ed Johnson, who is considered one of the founding fathers of the concrete drilling and sawing industry. Roughneck has managed to prevail through the ups and downs in the economy by adapting to the changes in its specialized market and by staying current with technology-even creating it by fabricating one-of-a-kind tools in house for specialized jobs.

A few years ago, Karen Johnson diversified into ground penetrating radar scanning to locate plumbing, rebar, wire mesh and electrical conduits buried in concrete. The FBI uses the same equipment. She'll leave the scanning for bodies to them, she says.

As a female-owned business in the construction industry, Roughneck can take advantage of federal government programs to bid for work. That being said, "If my rates aren't low, I won't get the job," says Johnson, who was named Small Businessperson of the Year by the U.S. Small Business Administration. "And then you still have to perform."