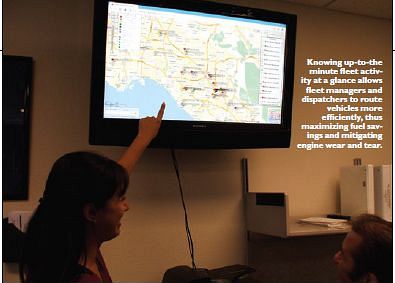 GPS-based fleet tracking and management systems first gained traction in companies with national fleets moving high-priced, mission-critical assets in complex routing and logistics situations. Tell that to a florist trying to make sure the flowers get to the wedding-her task is surely just as "mission critical." However, for those small businesses, the price of these early systems did not return a favorable ROI.

Now, these telematics systems have price points and functionality that are geared toward any business, and small fleets-from florists and landscapers to contractors and cleaners-are using them to schedule deliveries, track fuel consumption and monitor driver behavior.

Most fleet administrators say the primary benefit of a tracking system is to be able to know where your fleet vehicles are at any given time. Tighter routing and a reduction in non-authorized vehicle usage lead to fewer miles driven, which in turn lead to fuel savings and reduced engine wear and tear.

"Our biggest advantage is controlling the vehicles and the after-hours stuff," says Tom Shubert, fleet coordinator for Triple S Services, a pest control, landscaping and home improvement company in Manassas, Va. The company has the Networkfleet system installed in 40 trucks. "That was a killer," Shubert says. "For a service company, I'm never really sure if you're working for me or if you're working for you."

Fleet tracking systems allow administrators to set up "geo fences" around vehicles, which trigger an email if a vehicle travels into or outside certain parameters in a given timeframe. "Now the guys know that if they take a vehicle on the weekend, the system alerts me," says Shubert. "I don't have to go looking at each vehicle. I just check my emails, and if it's there, then we have a talk."

Bill Beckham of Burgundy Farms in Tallahassee, Fla., uses a system from Telogis to manage a fleet of 20 large trucks that move lumber across the Southeast. "The system shows us flags whenever something needs to be serviced," says Beckham. He retains two in-house mechanics to maintain his trucks, which run from 300,000 to 900,000 miles. "The mechanics don't have to chase anyone around to get the mileage, which is sometimes wrong," he says. "We just go to the computer and pick up the mileage and we know right then."

Jim Leslie runs Tucker Mechanical in Meriden, Conn., and uses a GPS vehicle tracking system from GPS Insight. His drivers had been filling out monthly reports that require mileage and a checklist of potential maintenance issues. "We would only see [the report] once a month," Leslie says. "And that went to our fleet manager, who is looking at 90 vehicles. He just didn't pay attention to it on a monthly basis, so things would fall through the cracks."

The PM alerts help to manage drivers who won't necessarily take preventive maintenance into their own hands.

"You have certain drivers who always keep their trucks impeccable," says Leslie. "They'll wash it because they don't like the way it looks. But you've got other guys that don't do anything. Those guys wait until the oil light comes on to change the oil. It's human nature."

Driving behavior affects fuel efficiency by as much as 25 percent. Fleet tracking systems measure speeding, hard acceleration and braking, elements that drive up maintenance costs but can be managed with alerts, reports and proper coaching.

Leslie set his system's speed threshold at 72 miles per hour, which allows for temporary passing speeds. "If they've been doing more than 72 mph for more than two minutes, we get a warning," he says. "We don't call them every time on their average speed, but if I get an alert that says they were doing 75 mph for their entire ride home, I know there is an issue."

John Shedd of Baker Installations, a cable and Internet installer serving the Pittsburgh and Harrisburg, Pa. markets, uses WEXSmart, a tracking and fleet management system offered through fuel provider Wright Express in partnership with Networkfleet. WEXSmart is installed in 265 of Shedd's pickup trucks. "We went from more than 1,000 instances of exceeding our speed limit down to fewer than 50 a week now," Shedd says. "So we're able to control that type of behavior. Obviously, that helps on the wear and tear on engines and brakes."

Shedd has also seen a reduction in the number and severity of accidents, and has been able to use the telematics information in accident investigations.

Idling is another driving behavior that has tremendous impact on fuel costs and engine wear. To many fleets, understanding this metric through idling reports is a huge eye opener.

Triple S schedules an idle report each month and reviews it with the drivers. "We can tell everybody exactly what it's costing us in fuel just to let their vehicles idle," says Tony Sfreddo, owner. The company can also act on idle alerts immediately. "Tom has even gotten on the phone and told the driver, 'Hey, what are you doing? You're idling; you're sitting there. Turn the motor off,'" says Sfreddo.

Leslie has confronted and managed similar idle problems. "I'd have guys who would come and pull around the back of the shop and leave their truck-in the wintertime, especially-idling for half an hour while they were inside," he says. "That went away."

Engine Diagnostics on Your Desktop

"I generally know there is something wrong with the truck before my drivers do. It makes it easier for us to manage our fleet on the service side," says Leslie. He is referring to the engine diagnostics function on his GPS Insight system. WEXSmart, Telogis and Networkfleet systems have similar diagnostics capabilities.

With diagnostics monitoring, the system interfaces with the engine computer to report a problem via a diagnostic trouble code (DTC) to the fleet administrator's desktop. While a "check engine" light can be as innocuous as a loose fuel cap or as serious as eminent engine failure, defining the issue with a DTC allows the fleet manager to handle problems in order of importance.

"Once I know what the code is, I can call our service place and ask the mechanic to look up the code," says Shubert. "If he tells me the problem is low air pressure on the right wheel, I'll call the driver, and we can deal with it when we can. But if he says it has something to do with the catalytic converter, I'll get him to come in earlier."

When it's necessary to send the vehicle to a mechanic, knowing the DTC ahead of time can prevent time spent hunting for the problem. Mechanics can get a jump on replacement parts to get the vehicle back on the road as quickly as possible.

Identifying a minor problem upfront can prevent a catastrophic repair later. Leslie recounts a driver complaining of having a slight problem in shifting. No engine light came on, but a DTC alert was relayed. He sent the van in for servicing, which led to replacing the solenoids. "The mechanic told me if we had not changed them, we could have blown the transmission. So, I had a $400 repair as opposed to a $2,800 repair," Leslie says.

GPS- and telematics-based fleet tracking and management systems carry one-time hardware installation and monthly wireless network fees. Vehicle diagnostic capabilities are available on a higher service package for those systems that offer it.

Return on investment can be measured in hard and soft costs. The most visible, immediate savings come in fuel cost. Triple S Services realized a 10 to 15 percent reduction on its $20,000 monthly fuel bill after the first month of installation, according to Shubert.

In addition, some insurance companies offer a reduction in premiums with a system install.

Mitigating engine failure, theft, accidents, insurance claims and trips to the mechanic-while reducing paperwork through automated reporting-are costs that are harder to quantify, though they still have a major impact on the bottom line.

"The actual purchase and implementation of the devices should be paid back in the next 12 months," says Shedd of Baker Installation, who is just completing full rollout of the system. "Just the fuel savings alone is a payback for all the monthly recurring fees, and then some. We're saving 10 to 12 percent on fuel, so we anticipate saving the same amount on maintenance. I believe it will be substantial."