The Malibu was recognized for its sleek design, roomy interior and fuel economy, while the Silverado was lauded among fleet managers and drivers for its styling, as well as durability and lifecycle benefits.

Since 2003, fleet professionals have voted on the model-year's fleet vehicles in the annual awards program. Casting online ballots, they are encouraged to select the car and/or truck that best fit their company fleet needs, considering features, function, styling, maintenance, remarketing value, OEM service, and driver feedback.

In the awards' seven-year history, Chevrolet vehicles have dominated the competition, earning at least one accolade each year. The Malibu and Chevrolet Impala each have claimed Fleet Car of the Year three times, and the Silverado achieved top honors four times.

The awards are important to the automaker. According to Chevrolet General Manager, Jim Campbell, "Knowing that fleet managers vote for their favorites and have chosen the Chevrolet Malibu and Silverado once again gives us validation that our customer focus is on the right track."

Fleet managers cited curb appeal, overall interior and trunk size, and fuel economy as some of the Malibu's winning features.

According to Campbell, the Malibu's fuel economy is now a leader in its industry segment. The sedan's new standard 170 hp Ecotec 2.4L four-cylinder engine employs such fuel-saving technology as variable valve timing (VVT) and is E-85 flex-fuel compatible. Combined with the 6-speed automatic transmission on 2LT and LTZ models, VVT enables Malibu to earn 33 mpg highway fuel consumption ratings, an outstanding highway driving range of up to 528 miles.

Labeled the "surprise of the automotive world" by U.S. News & World Report, the Malibu's sporty design is established by its long wheelbase, short overhangs, and tight wheel-to-body relationship. 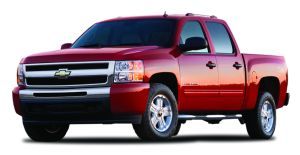 The 2010 Chevrolet Silverado delivers everything from outstanding fuel efficiency and enhanced driver control to high-strength steel and the latest electronics.

Available in Regular, Extended, and Crew Cab body styles, the pickup shares its basic design with the GMC Sierra 1500. Bed lengths of 5.8, 6.6, and 8 feet are offered, and the 2010 model is available with two interiors - pure pickup and luxury-inspired.