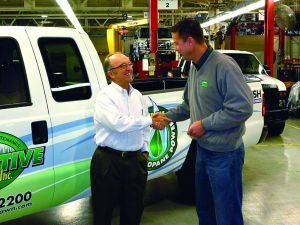 When Eric Hansen set out on his mission to create the first propane-powered lawn care crew in 2008, he couldn't have imagined the attention his 10-vehicle fleet would eventually attract. Last December, the founder and president of Downers Grove, Ill.-based Competitive Lawn Service Inc., took delivery of the first propane-fueled Ford F-350 from the Roush Performance assembly plant in Livonia, Mich. Auto racing and engineering mogul Jack Roush greeted Hansen at the plant and personally filled the truck's underbed tank as the cameras rolled.

It was more publicity than the unassuming Hansen was used to, but he didn't hesitate to lend his name to the movement toward alternative fuel use in commercial fleets. The Roush truck is Competitive's first propane vehicle, but Hansen's interest in alternative fuels began back in 2008, when gasoline hit $4.50 per gallon and the company had to find ways to cut costs.

Hansen started by retrofitting lawn care equipment such as mowers, trimmers and blowers to run on propane. There were a few bumps in the road as the Competitive team learned how to maintain the equipment on the fly. But for every obstacle, the "new" fuel seemed to present an advantage: Propane can't be spilled, and the cleaner burn produced quieter engines, less maintenance and fewer oil changes. Most importantly, the savings, even on a small scale - "Fifty bucks here and there," as Hansen recalls - began to add up.

Impressed, he pressed on. After testing all the new-to-market propane-powered equipment he could get his hands on, Hanson started looking into replacing his gas and diesel F-150s, F-250s, F-350s and Super Duty dump truck.

"Ford began producing vapor propane trucks in the late '90s, but there were two concerns for us," Hansen says. "One, they were 30 percent less fuel efficient, which we couldn't quite make up in the per-gallon cost. Two, they were F-150s - not big enough for our needs."

Competitive's needs also include full use of the cargo area, as it would be impossible for his slide-in dump/haulaway units to share space with an in-bed fuel tank. Luckily for Hansen, Roush's F-350 was already in development, and the design included an underbed tank.

"They really worked hard to get it right," Hansen says. "It's a 100 percent liquid system, so the propane goes in full liquid direct to the cylinders. There's no dropoff in performance or hauling power, and its range is about 300‑320 miles. And where the vapor Ford F-150s were 30 percent less efficient, this truck is only 10 percent less efficient. With the reduced cost for fuel, that's viable."

To accommodate the switch, Hansen installed a private, aboveground fill station on company property. The installation cost $10,000, but Competitive now spends only $1.50 to $1.70 on each gallon of propane. Hansen says that was the only option because the retail cost of propane in Downers Grove is more than three dollars per gallon. The company also recoups 50 cents on every gallon that goes into the truck, thanks to a federal tax credit which, unfortunately for Hansen, does not apply to the fuel that powers the equipment.

"That creates a little work for our accountant," he says. "He's working on how to split the expenses. I don't necessarily want to lead the fight to extend the tax credit to lawn equipment, but they did see the need to extend it to forklifts. It's possible that our equipment also could eventually qualify."

There are two ways to obtain a single propane-fueled F-350 from Roush. A new truck can be ordered through the Ford dealership or lease management company with Roush's ship-through code. For an existing truck, Roush can send a conversion kit to a local dealer, where it will be installed with support from the company. To retrofit an entire fleet that operates in multiple locations, Roush works with fleet managers to determine where their "SWAT" teams should be sent to support the conversions.

Even as he enjoys the cost savings, Hansen is equally proud of his company's shrinking carbon footprint.

"Larger companies are getting into the green initiatives," he says. "They're going to their plant managers and looking for lists of ways to cut emissions. When I meet a prospective client, I'll say, 'Every time we service your property, we're creating 60 percent less carbon output. Does that matter to you?' For smaller companies, the answer may be 'Not really.' For larger companies, it will likely be 'Yes.'"

Hansen's efforts have already brought in phone calls and e-mails from other business owners across the country. Most of them want to know about the maintenance and tax-credit aspects of switching to propane.

"I tell them we know how to maintain the equipment, but not the trucks - yet," he says. "As for the tax credits, we know the implications at the state and municipal level, but of course those will vary from place to place."

The purchase of the propane-fueled pickup earned Competitive a one-time credit of $4,500 from the State of Illinois. Hansen hopes to pick up a few more in 2010 by retrofitting some of his existing fleet trucks. "We'll do two or three more this year," he says. "There's also a federal credit of $5,000, so if we apply for both, the conversion cost is a wash." 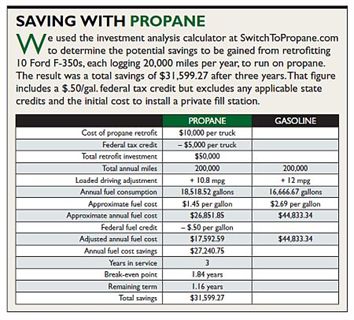