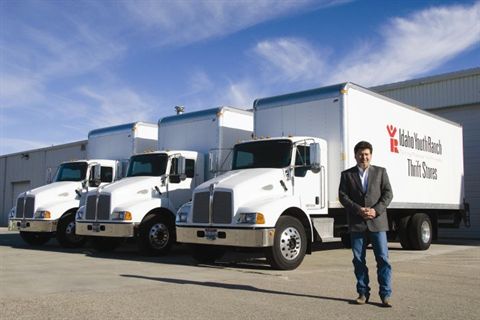 Choosing between diesel and gas used to be a no-brainer for truck fleet managers. The one-two punch of better fuel economy and higher torque from a diesel powerplant - not to mention greater engine durability - made it the fuel of choice for commercial applications.

That began to change with the introduction of ultra-low sulfur diesel (ULSD) fuel in 2007. The switch produced substantial environmental benefits; however, its per-gallon cost has remained high ever since, and the spread between gas and diesel pump prices has widened. To further eat into the bottom line, the latest diesel emissions standards, effective Jan. 1, 2010, have driven up diesel engine premiums by $5,000 to $10,000.

Fleet managers are adapting to these developments in a number of ways. Some are switching to fleet leasing programs to head off future costs. Others are considering gasoline or alternative fuels such as propane and compressed natural gas, and manufacturers and suppliers are responding with new engine options. Still others are investing in new technology to reduce emissions from or increase the efficiency of their existing diesel units.

Gregg Crow is the director of distribution for Idaho Youth Ranch (IYR), a Boise-based nonprofit that gives troubled children and their families the opportunity to live and work on a 500-acre rural ranch. Most of the ranch's operating funds are generated by a network of 27 thrift stores across the state, which are supported by a fleet of 33 trucks.

When Crow joined the organization in 2007, he was handed the keys to a hodgepodge of makes and models. They all came to the ranch used; some purchased, others donated by businesses. The organization wanted to expand its network of stores, but Crow couldn't make the numbers work with so many dilapidated trucks in the fleet. The cost to maintain them was up to 60 cents per mile for some units.

"The trucks were dying in the field," Crow says. "We knew we couldn't just go out and buy [new] trucks, so leasing made a lot of sense."

For Crow, fewer maintenance headaches and reduced downtime were attractive near-term benefits to leasing over buying. And through leasing, IYR is only paying for a fraction of the premium for the new diesel engine controls. As well, leasing offers a hedge against how those new diesel emissions systems will fare in the years ahead.

"Now is a good time to try leasing, especially with all the unknowns on the new [diesel] vehicles such as the urea tanks and other systems," says Steve Musgrave, Crow's account manager at Trebar.

Working with Trebar gives Crow the ability to crunch the numbers for multiple scenarios. "No matter which emission reduction system we choose to go with [to meet] the 2010 standards, there's no doubt it will add more dollars to the lease price," Crow says. "But we're looking at how those added costs can be captured back, in fuel savings and other ways. PacLease has been helpful to me in providing that data to make highly technical decisions."

As IYR's distribution network grows, Crow hopes to one day divide the fleet's miles between highway and in-town driving. That would give him the opportunity to add smaller vehicles, possibly including hybrids or alternative fuels. "If we're close to the distribution point, the lighter we can get, the more fuel savings we'll have," he says. 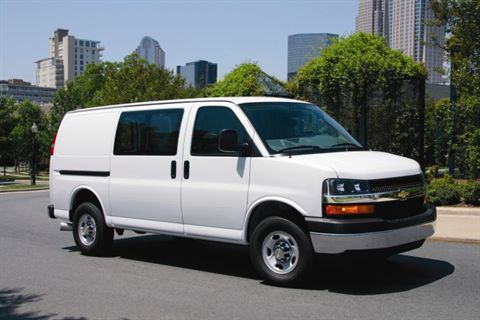 If you're looking into alternative fuels to power your fleet, the cost-benefit analysis became more attractive when the new diesel emissions controls were introduced this year.

General Motors has reentered the compressed natural gas market with a fully integrated, CNG fuel system option for its Chevrolet Express and GMC Savana vans. The CNG option package, available now, carries an MSRP of $15,910. That cost can be offset by government rebates of $5,000 to $7,000, though the rebates are set to expire at the end of 2010. (A new bill has been introduced to extend them.)

A propane (LPG, or liquefied petroleum gas) version is due out early next year.

Ford Motor Co. has introduced an alternative fuels engine prep package for its F-450 and F-550 Super Duty chassis cabs that use the 6.8-liter V-10, enabling the use of CNG or LPG.

ROUSH CleanTech - a new company under the ROUSH Enterprises umbrella - has rolled out a propane fuel conversion system for Ford's E-150, E-250 and E-350 vans, E-350 and E-450 cutaways, as well as F-150, F-250 and F-350 pickups. Certified to be sold in all 50 states, fleets can order the vehicles with the conversion installed, or bolt a retrofit  onto some existing models.

In the diesel-dominated truck segment, gas can be considered an "alternative fuel." Truck makers have responded with new gas-engine alternatives direct from the factory.

Freightliner Custom Chassis Corp. (FCCC) has jumped into the market with a gas-engine option on its MT-45 and MT-55 walk-in van chassis platform.

"The gasoline-powered chassis was designed and engineered by FCCC after speaking with numerous customers and recognizing there was a market desire for FCCC chassis with this powertrain," says Jonathan Randall, director of sales and marketing for FCCC.

Ford will introduce a V-10 gasoline engine option for its F-650 and F-750 chassis cabs for 2012. The three-valve, single-overhead-camshaft engine is rated at 457 lb.-ft. of torque and 362 horsepower. The V-10 will be mated to the heavy-duty six-speed TorqShift automatic transmission. 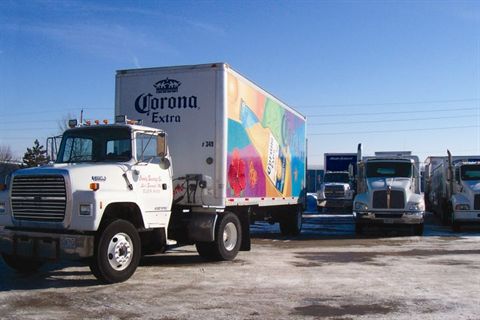 Ron Burkhart runs a fleet of 35 medium-duty trucks, most of them Kenworth T300s and International HT 570s, for County Beverage, an Anheuser-Busch wholesaler in Lee's Summit, Mo. The 30-year fleet veteran and longtime truck mechanic was searching for a diesel alternative, but instead found a system that works with his existing diesel engines to make them burn cleaner and get better fuel economy.

Burkhart uses an injection system from Diesel Performance Products (DPP) that mixes propane vapor with diesel fuel on the intake stroke. The bolt-on system, called Powershot 2000, uses a patented regulator/valve design to gauge boost pressure and inject propane from a proprietary tank; either progressively or variably with the turbo boost pressure. The result is an approximately 30 percent LPG, 70 percent diesel mix. The compression ignites the diesel fuel, which in turn ignites the LPG. The result is a cleaner burn - up to 100 percent of the diesel in the chamber - and less "black smoke."

"When we started back in 2000, our focus was on performance," says DPP's founder, Keith Long. "We began to see Powershot as 'green' technology around the same time fuel prices shot up, in 2007."

The results for County Beverage have been impressive. Burkhart has seen a nearly 100 percent improvement in fuel economy, burning eight to 10 miles per gallon in trucks that used to get four or five. Overall, he has reduced his fuel spend by about a third, and his drivers are happy as well.

"They love it for the performance," Burkhart says. "These trucks have 250 or 275 horsepower, and they start out loaded heavy. With the propane injection system, they can get up hills, pass cars - it has all the power they need."

It's clear that diesel is in a transition phase, but the fuel's leadership role in truck applications is in no immediate danger. Until the economies of scale catch up to the goals of clean-air advocates, fleet managers and manufacturers will continue to find ways to adapt to the new rules of the road.