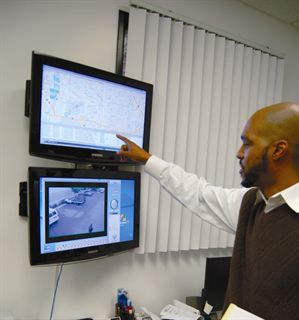 It's an uncommonly rainy morning at Vector Resources Inc., and the lobby of the company's Torrance, Calif. headquarters is host to a parade of visitors coming in from the cold. They're a contingent of employees of information networking giant and Vector business partner Hewlett-Packard, stopping to sign the guestbook on their way to the office's first-floor classroom for a daylong training session.

That a Southern California-based IT network solutions provider should play host to representatives of one of the world's largest corporations comes as no surprise to Will Smith. As Vector's director of fleet services and warehousing, he has played both witness and accomplice to the company's two decades of steady growth.

Vector Resources was founded in 1988 as a communications cable installation business. In the two-plus decades since, the company has expanded to 350 employees and now takes on massive systems integration projects, designing, installing and maintaining networks for clients ranging from Fortune 500 companies to large urban school districts to major hospitals and logistics centers.

When Smith joined the company's five-man warehouse crew in 1999, the fleet matched the company's still-slender profile. "When I started my career at Vector, we had one location and four vehicles," he says. "A 1999 Dodge cargo van, a 1999 Chevy stakebed, a 2000 Chevy Silverado pickup and a 1980-something Toyota pickup we called 'Little Red.'"

Under Smith's watch, that four-vehicle fleet grew to 30 medium-duty trucks, cargo vans and pickups, with four more to be added this year. The company now has four locations, each of which soon will serve as a sales and distribution point. The newest office - and first outside California - is in Phoenix.

Each distribution point requires at least one medium-duty box truck, which will double as a mobile workstation. Each of Vector's five box trucks racks up 8,000-10,000 miles per year, as do the company's two stakebed trucks. Then there's Vector's fleet of 17 vans, which make an average of 15,000-20,000 miles' worth of service calls each year. 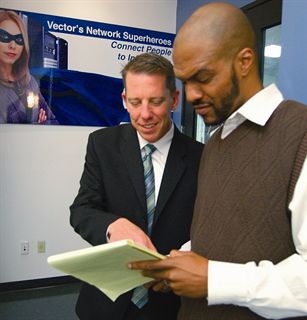 As the number of vehicles grew, managing the fleet became a full-time job on its own. But Smith remained in charge of Vector's warehouse and equipment purchasing operations, and it soon became clear that he would need help on the fleet side. His search for assistance would lead him to Enterprise Fleet Management and account manager Tony Rangel.

"Before Vector partnered with Enterprise, Will was handling everything in-house, including acquisition, maintenance, fuel oversight and disposal," Rangel says. "Outsourcing those functions to us has helped free up his time to focus on other core responsibilities."

Additional benefits include Wright Express fuel cards, which Smith says offered a "significant" cost savings over their old provider, and the streamlining of fleet costs, which saves money and headaches in Vector's accounts payable department.

The new partnership led to several changes in Smith's approach to fleet management. First and foremost, he was able to streamline his process for ensuring that all company vehicles meet or exceed safety standards - and were ready to go to work. Now, each vehicle's usage and roadworthiness are carefully tracked, and unexpected repairs are rare.

"[Enterprise]'s most important contribution is its vehicle maintenance program," he says. "I've found that, if our mechanical needs are handled smoothly and professionally, I don't really have to worry about downtime. And if the schedule is right, I have a vehicle coming online the moment I take one offline."

He is able to monitor each vehicle from his office with the help of the Xora GPS system. Their signals feed into a monitoring system that was custom-built by Vector network technicians.

When the trucks and vans reach end of cycle, Smith will continue his strategy of purchasing new vehicles from the factory or dealer lots and remarketing via direct sales. He has at times considered leasing - and the new office in Phoenix required a few short-term rentals - but he plans to keep the titles in Vector's hands for the foreseeable future.[PAGEBREAK] 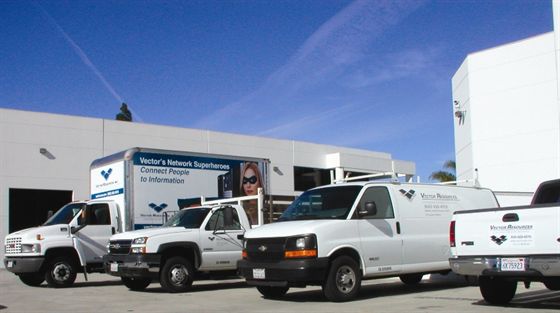 Another new fleet initiative is the addition of vinyl-wrap graphics to Vector's largest vehicles. The graphics depict a striking business woman dressed in a pinstripe power suit, striking a triumphant pose in front of a trio of networking servers. However, this particular businesswoman also sports a navy blue mask and cape, standing under a caption that reads: "Vector Superheroes Connect People to Information."

The truck-wrap initiative was developed in-house under the direction of Robert Messinger, Vector's executive vice president of sales and operations. "We wanted something that would grab people's attention, and based on the feedback we're getting, we have achieved that," Messinger says. "It's not complicated: We wanted folks out there to notice our trucks, and it's working."

"The owners of our company have a vision: That IT networks are positioned to drive companies, but that you need a confident, trustworthy professional to get you there," adds Vector's marketing director, Phil Bonney. "That's how we came up with the superhero idea. It promotes Vector's front-edge approach."

The vinyl wraps could soon appear on the service vans as well. Bonney and Smith share the belief that the moves the company has made on the fleet side will benefit Vector's continued growth. To that end, Smith has added a quarterly inspection program to Enterprise's service and rotation schedule, and company policy mandates that every driver complete a pre-trip visual inspection to be sure the vehicles look their best.

"We remain focused on the fact that our fleet is an important part of our company image," Smith says. "We keep our vehicles clean - always have, always will. Our truck-wrapping initiative only underscores this."

Vector Resources by the Numbers

The Vector service and installation fleet started with four vehicles in 1999 and will grow to 34 by the end of 2011. Currently, that fleet includes: