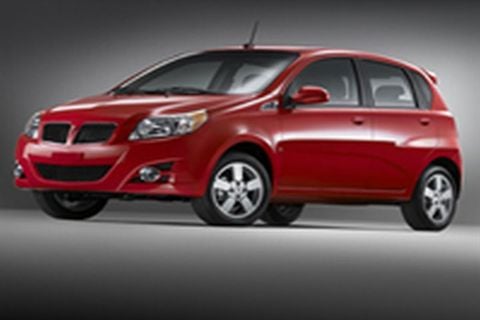 Expanding its portfolio in the small car segment, Pontiac announced plans to bring the sporty, five-door hatchback G3 to U.S. showrooms early next year. When it arrives, the G3 will provide Pontiac with a total of four vehicles capable of more than 30 miles per gallon on the highway.

Already successful in Canada (as the Pontiac G3 Wave) and Mexico (as a sedan model), the G3 offers an EPA estimated 27 mpg in the city and 34 mpg on the highway while providing the best shoulder and hip room in the segment for seating five adults.

Generating 106 horsepower (79 kW), the G3's 1.6L Ecotec four-cylinder engine is mated to a five-speed manual or optional four-speed automatic transmission. It will also feature an unusually rich mix of standard features for an entry-level car, including air conditioning, a CD/MP3 audio system with auxiliary input jack, fog lamps, rear spoiler, OnStar, and a host of standard safety features, including four airbags, that gain the G3 a five-star frontal crash rating.

Interior space is optimized to comfortably seat five adults, including "theater"-style seating for rear seat passengers. The rear seats also feature a 60/40 split to offer up to 42 cubic feet of cargo space.

The Pontiac G3 will arrive in U.S. showrooms in spring 2009 as a 2009 model and will be backed by GM's five-year 100,000 mile powertrain warranty. Pricing will be announced closer to introduction.