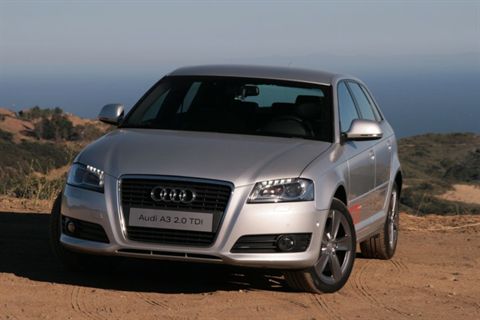 Audi announced pricing for the 2010 A3 TDI, its second U.S. clean diesel offering launched this year. Expected to begin arriving at U.S. dealers in late November 2009, the 50-state certified A3 TDI delivers the highest highway fuel economy in the luxury car category - 42 mpg, according to U.S. Environmental Protection Agency estimates.

In fact, the EPA calculated that if only one-third of the vehicles on American roads ran on clean diesel, the U.S. would use 1.5 million fewer barrels of oil each day. Audi was the first German car manufacturer to combine turbocharging with diesel engine technology in 1989, and has continued to evolve its technology ever since. Audi Sport has helped prepare the way for TDI clean diesel in the United States by racing the R10 TDI sports car from 2006-2008 in the American Le Mans Series and sweeping the major endurance races at the 12 Hours of Sebring (Sebring, Fla.) and the 10-hour Petit Le Mans (Atlanta, Ga.). In addition, the R10 TDI won all three 24 Hours of Le Mans endurance races in which it competed from 2006-2008. The R15 TDI continued the TDI clean diesel performance tradition by winning the 12 hours of Sebring endurance race in March 2009.

The pulling power of torque is the signature performance feature in all diesel models, and the A3 TDI clean diesel is no different. Offering 140 hp and 236 lb-ft of torque, this model performs briskly and efficiently with unmatched performance with its EPA-estimated 30/42 city/highway fuel efficiency.

The competitive set for the A3 TDI clean diesel is unique. Only one competitor is currently playing in the field of fuel-efficient compact luxury vehicles, but does not offer the driving experience or the 5-door flexibility that includes 40/60 split rear-folding seats. The Lexus HS 250h offers similar combined fuel economy with hybrid technology, but not superlative highway mileage range. The A3 TDI offers more superlatives in value, including a standard S line exterior sport appearance for 2010, a tighter steering turning circle, a top speed of 130 mph, as well as a 12-year limited warranty against corrosion.