America's century-old love affair with the automobile may be coming to an end. The U.S. fleet has apparently peaked and started to decline. In 2009, the 14 million cars scrapped exceeded the 10 million new cars sold, shrinking the U.S. fleet by 4 million, or nearly 2 percent in one year. While this is widely associated with the recession, it is in fact caused by several converging forces, reports Lester Brown of the Earth Policy Institute.

Future U.S. fleet size will be determined by the relationship between two trends: new car sales and cars scrapped. Cars scrapped exceeded new car sales in 2009 for the first time since World War II, shrinking the U.S. vehicle fleet from the all-time high of 250 million to 246 million. It now appears that this new trend of scrappage exceeding sales could continue through at least 2020. (See data.)

Among the trends that are keeping sales well below the annual figure of 15-17 million that prevailed from 1994 through 2007 are market saturation, ongoing urbanization, economic uncertainty, oil insecurity, rising gasoline prices, frustration with traffic congestion, mounting concerns about climate change, and a declining interest in cars among young people.

Market saturation may be the dominant contributor to the peaking of the U.S. fleet. The United States now has 246 million registered motor vehicles and 209 million licensed drivers-nearly 5 vehicles for every 4 drivers. (See data.) When is enough enough? 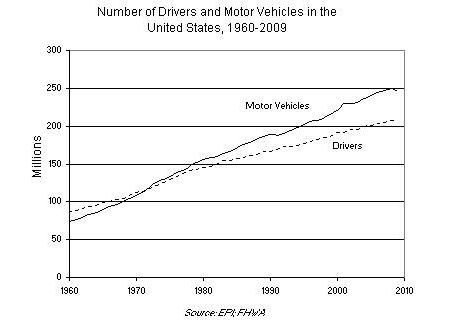 Japan may offer some clues to the U.S. future. Both more densely populated and highly urbanized than the United States, Japan apparently reached car saturation in 1990. Since then its annual car sales have shrunk by 21 percent. The United States appears set to follow suit. (See data.)

The car promised mobility, and in a largely rural United States it delivered. But with four out of five Americans now living in cities, the growth in urban car numbers at some point provides just the opposite: immobility. The Texas Transportation Institute reports that U.S. congestion costs, including fuel wasted and time lost, climbed from $17 billion in 1982 to $87 billion in 2007.

Mayors across the country are waging a strong fight to save their cities from cars, trying to reduce traffic congestion and air pollution. Many are using a "carrot-and-stick" approach to reduce costly traffic congestion by simultaneously improving public transportation while imposing restrictions on the use of cars.

Almost every U.S. city is either introducing new light rail lines, new subway lines, or express bus lines, or they are expanding and improving existing public transit systems in order to reduce dependence on cars. Among the cities following this path are Phoenix, Seattle, Houston, Nashville, and Washington, D.C. As urban transit systems expand and improve, commuters are turning to public transit as driving costs rise. Between 2005 and 2008, transit ridership climbed 9 percent in the United States. Many cities are also actively creating pedestrian and bicycle-friendly streets, making it easier to walk or bike to work.

Forward-looking cities are also reconsidering parking requirements for new buildings. Washington, D.C., for example, has rewritten its 50-year-old codes, reducing the number of parking spaces required with the construction of both commercial and residential buildings. Earlier codes that once required four parking spaces for every 1,000 square feet of retail space now require only one.

As parking fees rise, many cities are moving beyond coin-fed parking meters and replacing them with meters that use credit cards. The nation's capital is making this shift in early 2010 as it raises street parking fees from 75¢ to $2 per hour.

Economic uncertainty makes some consumers reluctant to undertake the long-term debt associated with buying new cars. In tight economic circumstances, families are living with two cars instead of three, or one car instead of two. Some are dispensing with the car altogether. In Washington, D.C., with a well-developed transit system, only 63 percent of households own a car.

A more specific uncertainty is the future price of gasoline. Now that motorists know that gas prices can climb to $4 a gallon, they worry that it could go even higher in the future. Drivers are fully aware that much of the world's oil comes from the politically volatile Middle East.

Perhaps the most fundamental social trend affecting the future of the automobile is the declining interest in cars among young people. For those who grew up a half-century ago in a country that was still heavily rural, getting a driver's license and a car or a pickup was a rite of passage. Getting other teenagers into a car and driving around was a popular pastime.

In contrast, many of today's young people living in a more urban society learn to live without cars. They socialize on the Internet and on smart phones, not in cars. Many do not even bother to get a driver's license. This helps explain why, despite the largest U.S. teenage population ever, the number of teenagers with licenses, which peaked at 12 million in 1978, is now under 10 million. (See data.) If this trend continues, the number of potential young car-buyers will continue to decline.

Beyond their declining interest in cars, young people are facing a financial squeeze. Real incomes among a large segment of society are no longer increasing. College graduates already saddled with college loan debt may find it difficult to get the credit to buy a car. Young job market entrants are often more interested in getting health insurance than in buying a car.

No one knows how many cars will be sold in the years ahead, but given the many forces at work, U.S. vehicle sales may never again reach the 17 million that were sold each year between 1999 and 2007. Sales seem more likely to remain between 10 million and 14 million per year.

Scrappage rates are easier to project. If we assume an auto life expectancy of 15 years, scrappage rates will lag new sales by 15 years. This means that the cars sold in the earliest of the elevated sales years of 15-17 million vehicles from 1994 through 2007 are just now reaching retirement age. Even though newer cars are more durable than earlier models, and may thus stay on the road somewhat longer on average, scrappage rates seem likely to exceed new car sales through at least 2020. Given a decline of 1-2 percent a year in the fleet from 2009 through 2020, the U.S. fleet could easily shrink by 10 percent (25 million), dropping from the 2008 fleet peak of 250 million to 225 million by 2020.

At the national level, shrinkage of the fleet combined with rising fuel efficiency will reinforce the trend of declining oil use that has been under way since 2007. This means reduced outlays for oil imports and thus more capital retained to invest in job creation within the United States. As people walk and bike more, it will mean less air pollution and fewer respiratory illnesses, more exercise and less obesity. This in turn will also reduce health care costs.

The coming shrinkage of the U.S. car fleet also means that there will be little need to build new roads and highways. Fewer cars on the road reduces highway and street maintenance costs and lessens demand for parking lots and parking garages. It also sets the stage for greater investment in public transit and high-speed intercity rail.

The United States is entering a new era, evolving from a car-dominated transport system to one that is much more diversified. As noted, this transition is driven by market saturation, economic trends, environmental concerns, and by a cultural shift away from cars that is most pronounced among young people. As this evolution proceeds, it will affect virtually every facet of life.

Lester R. Brown is the president of the Earth Policy Institute and author of "Plan B 4.0: Mobilizing to Save Civilization."