Leases originated in 2009 have a $2,000-plus gap between their contracted residual values and what the vehicles will likely be worth at the end of their contracts, according to CNW Market Research's Future Residual Analysis.

The Bandon, Ore.-based research firm said that while the loss-per-vehicle number may decline somewhat by the end of a contract due to outside influences such as a run-up in new-car prices bringing used values upward, the trend is what matters.

The difference between contract residuals and actual used values for leased cars and trucks could hurt lessors, warned CNW's Art Spinella, who recalled when the industry had a $10 billion shortfall and drove lessors out of business.

"The current gap has been growing since 2005 as more automakers offer subvented leases, cutting either interest rates to near zero or boosting residual-value projections well past ALG guidelines to bring monthly lease payments to a level consumers can't afford to pass up," Spinella wrote. "For automakers, while caution hasn't yet been thrown to the wind, the temptation to best the competition in a tight auto market is powerful stuff. Especially when fueled by dealers who believe their lease program is somehow inferior to a local competitors lease offers." 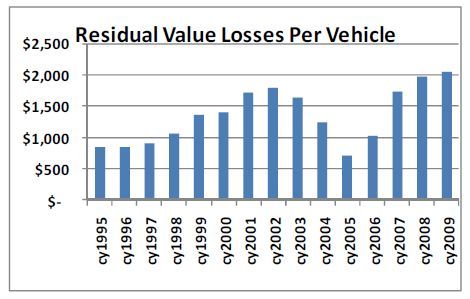 In order to avoid billions of lost dollars, Spinella said lessors should adhere to the ALG guidelines.