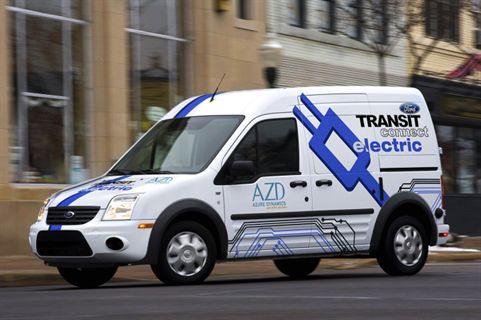 CHICAGO - Ford Motor Company unveiled the all-electric version of the Ford Transit Connect at the Chicago Auto Show on Feb. 8 - the first product in the automaker's accelerated electrified plan. Limited production of the new model will begin this year, with full production ramped up in 2011. Ford confirmed the zero-emissions small van will be in fleet operators' hands later this year.

About 1,000 units will be produced annually depending on customer response, said Praveen Cherian, program manager of the Transit Connect, at the Chicago Auto Show. Ford collaborated with Mich.-based Azure Dynamics and Johnson Controls-Saft's technology in the development of the electric model.

Cherian said the vehicles are designed to meet the needs of commercial customers with a predictable drive route, such as "florists or a handyman, plumber, or a Best Buy Geek Squad, utility type purposes vehicle." Rechargeable using either 240-volt or standard 120 volt outlets, the electric vehicle can travel a range of 80 miles, providing an alternative for drivers who need a utility vehicle, but don't want a pickup truck.

The Transit Connect has proven its popularity among commercial customers over the past year, earning itself the title of 2010 North American Truck of the Year. Businesses currently using the Transit Connect include Thyssenkrupp, Edible Arrangements, Ambius, KONE, Reddy Ice Holdings, and Mancuso Florists.

Production of the Ford Transit Connect Taxi, which will arrive in dealerships later this year as a 2011 model, was also announced. The automaker said it will introduce engine prep packages on all Transit Connect models - base and taxi - allowing conversion to efficient, clean-burning compressed natural gas (CNG) or propane (LPG, or liquefied petroleum gas).

To further serve taxi operators, Ford will provide required calibration specifications for the CNG or LPG conversion. By properly following Ford's specifications, the conversion can be completed without voiding the engine's warranty.

In addition to the Transit Connect Electric, Ford plans to bring three more electrified vehicles to market by 2012 - the Focus Electric in 2011, a plug-in hybrid electric vehicle in 2012, and a next-generation hybrid in 2012.