The report's authors project that just two of many possible V2V communications applications — left turn assist and intersection movement assist — could save as many as 1,083 lives and prevent up to 592,000 crashes annually.

Left turn assist warns drivers not to turn left in front of another vehicle traveling in the opposite direction, and intersection movement assist warns them if it’s not safe to enter an intersection because of the likelihood of a collision. Additional applications could also help drivers avoid imminent danger through forward collision, blind spot, “do not pass,” and stop light/stop sign warnings.

NHTSA estimates that the V2V equipment and supporting functions would cost about $341 to $350 per vehicle in 2020. That cost might dip to approximately $209 to $227 by 2058, after manufacturers gain experience producing the equipment, according to the report.

NHTSA is seeking public and industry feedback on the report's findings. This input will aid in development of a new federal standard requiring V2V communication capability in new passenger cars and light-duty trucks.

"V2V begins to provide safety benefits only if a significant number of vehicles in the fleet are equipped with it and if there is a means to ensure secure and reliable communication between vehicles," according to the report. "NHTSA believes that no single manufacturer would have the incentive to build vehicles able to 'talk' to other vehicles, if there are no other vehicles to talk to — leading to likely market failure without the creation of a mandate to induce collective action."

V2V technology can combine with existing vehicle safety features and serve as a building block for development of driverless vehicles, supporters of the technology predict.

Vehicles equipped with V2V technology could also enable the development of a wide range of mobility and environmental benefits based on vehicle-to-infrastructure applications and other V2V applications that can enhance traffic flow in many ways, according to NHTSA.

"V2V technology does not involve collecting or exchanging personal information or tracking drivers or their vehicles," according to NHTSA. "The information sent between vehicles does not identify those vehicles, but merely contains basic safety data. In fact, the system as contemplated contains several layers of security and privacy protection to ensure that vehicles can rely on messages sent from other vehicles."

In responding to NHTSA's actions, two automaker associations — the Association of Global Automakers and the Alliance of Automobile Manufacturers — urged the federal government to reserve and protect the 5.9 GHz frequency band for eventual V2V communications. The Federal Communications Commission is exploring whether the spectrum should be shared to create more spectrum for Wi-Fi service.

"As we begin to move from the research lab to the actual deployment of vehicle-to-vehicle and vehicle-to-infrastructure communications technology, it remains critically important that the FCC preserve the ability to use the radio spectrum reserved for it," the Alliance of Automobile Manufacturers said in astatement.

The Association of Global Automakers echoed those concerns.

“There is no better use of this spectrum than to save lives," said John Bozzella, president and CEO of Global Automakers. "Communication delays of even thousandths of a single second matter when dealing with auto and highway safety."

To learn more about the lingering debate over the 5.9 GHz frequency band, click here or on the photo below. 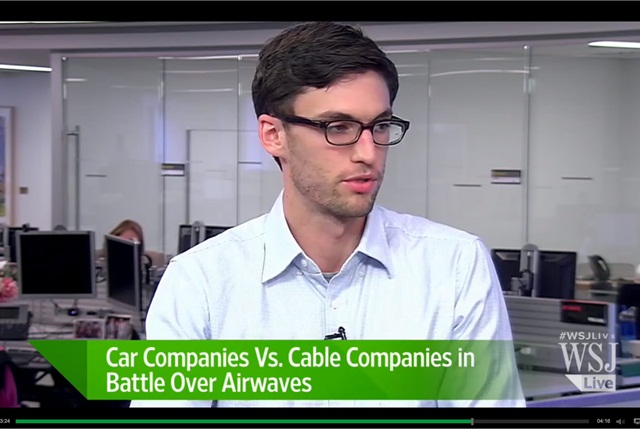