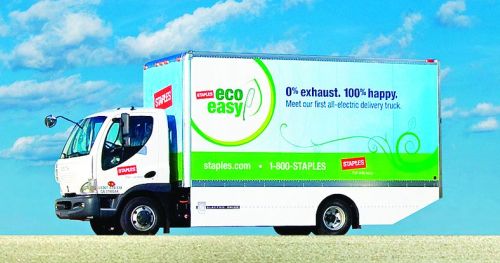 Framingham, Mass.-based Staples recently concluded a fleetwide hybrid-diesel pilot program in Los Angeles, which was designed to test the electric launch capability of a torque-assistance (bolt-on) hybrid technology, identify its viability and determine whether it could work with the fleet's current Isuzu diesel powertrains, according to Mike Payette, fleet equipment manager for Staples.

Payette oversees a fleet of 2,200 vehicles comprised of Isuzu N-Series and FTR, International 4300 and Freightliner M2 Class 5, 6, and 7 medium-duty trucks. The fleet is wrapping up another hybrid pilot program in Boston.

When deciding which selector to use, Payette turned to Isuzu, telling company officials he wanted to reduce his $40,000-$50,000 daily fuel spend.

"Anything I can do to save a nickel per truck per day comes out to a lot of money at the end of the year," Payette said. "From our drivers' standpoint, Isuzu has made very few changes in its cab design over the years, so whether we operate a 1994, 1998, or 2004 model, the cabs are essentially the same, the trucks operate in the same way, and all the buttons are in the same place. It's easy from a fleet standpoint to move the vehicle around from driver to driver."

According to Payette, Isuzu customers in the U.S. who want a hybrid application must install an aftermarket bolt-on hybrid drive system. However, this also allows fleet customers to spec how many trucks to hybridize or remain conventional diesel, depending on driver route structures.

Searching for an Answer

Staples' fleet completes 48-52 stop-and-go deliveries per truck per day, an operation well suited to electric- or hybrid-drive technology. However, following the Los Angeles pilot program, Payette and his team concluded the simple bolt-on aftermarket hybrid system used in the test wasn't the way to go.

Instead, Payette believes the system must be offered by OEMs as part of an entire powertrain package. A true electric-launch system that can handle the peak horsepower and torque needs of the launch should be paired to a much smaller internal combustion engine that gets more than 25-30 mpg just to maintain the vehicle's speed.

"For instance, if an Isuzu truck runs a 5.4L four-cylinder diesel with a bolt-on hybrid system used to electrically launch the vehicle, once that vehicle gets up to speed, it still has a 210-hp, 5.4L diesel when all that is needed is about 130 horses to maintain the truck's speed," Payette said.

According to Payette, Isuzu acknowledges a 210-hp engine  is not needed with the proper hybrid system bolted between the engine and transmission. However, the manufacturer currently does not offer a smaller diesel engine certified to meet U.S. emissions standards.

The hybrid pilot program is part of a larger greening effort by Staples as a responsible environmental corporate citizen. However, not every truck in Payette's fleet will benefit from a hybrid system, just as every truck wouldn't benefit from a 100-percent electric system.

"A vehicle that serves all purposes just can't be produced anymore. Instead, niche vehicles, such as those that only operate in the inner city, have the benefit of technology available today to maximize the CO2 and fuel reductions," Payette said. "There's no one vehicle that can handle all my needs yet. I can't get enough range out of the all-electric vehicles, and the diesel-electric or gasoline-electric hybrids are a good inter-step, but again, they wouldn't work on a high-mileage route because I'm not going to get the benefit of the electric launch."

As fast as hybrid technology is evolving and the length of time the fleet keeps its trucks, Payette never replaces all his trucks simultaneously. The units are constantly rolling. If Payette changed 17 percent of his trucks per year, the entire fleet would be replaced in six years. Since Payette leases his vehicles and holds on to the units six or seven years, it's important he brings the right application aboard to run during the truck's service life.

According to Payette, the beauty of an entire diesel-powered truck fleet, whether units run a 20,000- or 120,000-mile per-year-route, is he can move those trucks around to cover for each other. If one unit begins to record higher mileage, he can replace it with another of less mileage.

"Specializing your fleet to where 20 percent of a truck operates on electricity limits you to routes less than 70 miles a day, so you have to be very selective in how you specify your fleet to cover route contingencies as far down the road as you can envision," Payette noted.

In transitioning to hybrids, drivers were instructed to gently accelerate. For the hybrid system to work, there must be low demand from the throttle position sensor. Drivers are told to gently squeeze the accelerator pedal, which allows a more electric-powered than diesel-powered launch.

When Payette started testing the hybrid units, his team could regulate the amount of electric power used to launch the vehicle. Since the electric system was bolted between the transmission and rear axle, he deployed a 25-percent launch capability until the rear-end gears broke in before cranking up the amount of electric launch and reducing the amount of diesel launch. Payette estimates the fleet must realize a 20 percent increase in fuel economy for the hybrid technology program to be viable.

The Staples fleet's biggest change was reducing the top speed of all vehicles to 60 mph, increasing the fleet's overall efficiency by 8.5 mpg to a little more than 10 mpg per unit.

Tackling 'Green' on All Fronts

Staples' fleet has tackled its corporate greening philosophy from several fronts. In addition to the hybrid systems, Payette also has experience working with alternative fuels such as propane and compressed natural gas.

He also has experimented with biodiesel. However, the biggest issue with biodiesel is the blending method. Injection blending provides a much closer B-20 blend all the time, but Payette says most people are still doing a splash blend. When he pulls tests on B-20 fuel in his fleet, he has seen the blend ratio range from as low as B-5 to as high as B-73, but it's all sold as B-20.

Payette has done retrofits, but would rather have the technology installed by OEMs to take advantage of warranty coverage and the economies of scale Staples enjoys through vast purchasing power and production capabilities.

The fleet is experimenting with an FMI smart controller that electronically interprets the throttle position signal from the accelerator pedal and reduces the amount of fuel going to the engine.

The fleet also has received federal funding to bring as many as 28 Smith Electric vehicles to the state of Ohio. Payette plans to put into service this year a combination of hybrid-electric vehicles with electric launch, a few electrics, and some spark ignition. In 12-18 months, he will implement the next-generation Isuzu models.

To implement a similar program, Payette suggests smaller companies work with local groups and associations such as the National Private Truck Council, National Truck Equipment Association (NTEA) and NAFA Fleet Management Association. He also recommended collaborating with similar fleets to approach OEMs as a combined force with the leverage of volume.

"One of the big complaints fleet managers have of OEMs," Payette continued, "is fleet managers have to modify how they distribute their products based on the type of equipment the OEMs provide. We always try to challenge the OEMs to listen to us and give us the kind of equipment we need to make our deliveries. Give me the technology I need so I can reduce my dependence on foreign oil and leave a smaller carbon footprint in my exhaust as I drive down the street, and make it affordable."