WASHINGTON - The American Council for an Energy-Efficient Economy has released its 14th annual environmental ratings for the model year. For the 8th year, the Honda Civic GX natural gas vehicle wins top honors, despite changes to rating methods that boosted other technologies. 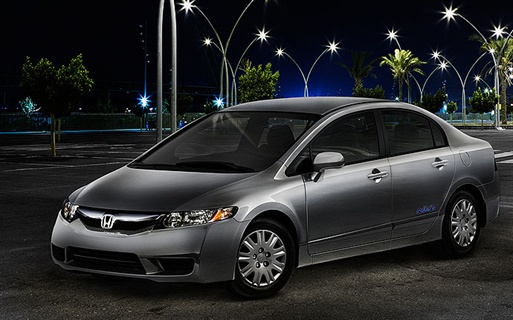 Below the top spot, however, the "Greenest" list sees a shake-up: the all-electric Nissan Leaf places second, followed by the gasoline-powered Smart Fortwo. Hybrids take the next three spots, followed closely by Ford's new Fiesta SFE (Super Fuel Economy) and the Chevrolet Cruze Eco. Also notable on this year's list is the Hyundai Elantra, with a four-mile-per-gallon jump in fuel economy over the 2010 model. Rounding out the "Greenest" are the Mazda 2 and the Chevrolet Volt, which capture the 12th and 13th spots. All told, six new models pushed out entries on last year's list, ACEEE said.

The strong showing of conventional vehicles in the top 12 is a testament to how serious manufacturers have gotten about recasting these vehicles as fuel-sippers with transmission refinements, weight savings, and sophisticated internal combustion engines, ACEEE noted.

"We're seeing an increasing number of highly efficient gasoline options from both foreign and domestic automakers along with the first electric vehicles. Ford introduced the Fiesta this year and Chevrolet debuted the Cruze, both of which do exceedingly well in our ratings," said ACEEE vehicle analyst Shruti Vaidyanathan.

Regarding plug-in vehicles, ACEEE Transportation Director Therese Langer said: "Vehicles running on electricity emit nothing from the tailpipe, but their 'upstream' emissions can be substantial, depending on where they're charged. As U.S. power generation becomes cleaner, these vehicles' scores will rise."

"Green scores" of the 1,000-plus configurations of all model year 2011 vehicles are made available to subscribers of ACEEE's Green Book Online interactive database along with each configuration's fuel economy, health-related pollution impacts, global warming emissions, and estimated fuel expenses. The American Council for an Energy-Efficient Economy is an independent, nonprofit organization dedicated to advancing energy efficiency as a means of promoting economic prosperity, energy security and environmental protection.

The Green Book methodology update also incorporates emissions associated with battery manufacture and disposal in a manner that reflects material content, drawing from Argonne National Lab's GREET model, ACEEE said. Hybrids lose a couple of points on their green scores as a result and this year capture only three of the top 12 spots. Once again diesels fall just short of the Greenest list.

The greenercars.org Web site also identifies a selection of top, widely available models in each vehicle class. This "greener choices" list includes trucks and SUVs such as the Hyundai Tucson, Chevrolet Equinox, GMC Canyon and the Ford F-150 (FFV). Cars such as the Honda CR-Z and Hyundai Sonata top their respective classes.