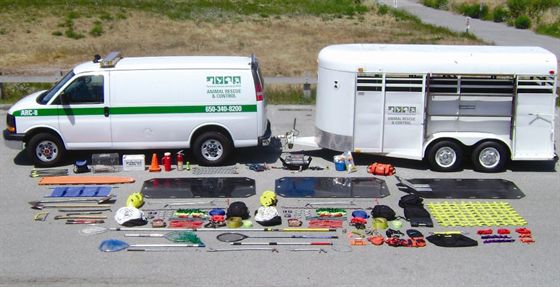 As captain of animal rescue and control for the Peninsula Humane Society & SPCA of San Mateo County, Calif., Jeff Christner has collected a few war stories. There's the one about the 11-hour, multi-agency rescue of a horse that slipped down an embankment, or "Freeway," the cow that survived a fall from a trailer on U.S. 101. Then there's the pair of ostriches Christner was tasked with delivering to a wildlife sanctuary.

"They weren't escapees," he recalls. "I think the owner just couldn't take care of them anymore. We sent one of the old vans, and they pecked out one of the windows."

The county, which includes the lower half of the San Francisco Peninsula and the northern end of Silicon Valley, has entrusted PHS/SPCA with the task of managing the welfare of the county's millions of four-legged residents. As such, the organization's fleet needs are numerous and diverse. Christner has enough experience to know what he and his officers need to get the job done, but, like many small-fleet operators, has never claimed to be a "car guy."

Nor has Debbie Fischer, PHS/SPCA's vice president of finance and administration, who joined the staff in 2009 after several years as a volunteer. Her duties include the administration of the organization's fleet of eight custom-built vans, four Ford F-250 and two GMC Sierra pickups, as well as a mobile adoption center and a mobile spay/neuter clinic. In addition to rescue and transport, PHS/SPCA handles lost and found, cruelty investigations, wildlife rehabilitation, education and more.

Fischer soon realized that the stack of closed-end leases PHS/SPCA had written with their former fleet management company was a bad fit, as was the organization's procurement process, which delivered vehicles that were not ready for service.

"The chassis cabs would show up, and then we were responsible for doing all the running around and getting things switched over, like mounting the box and getting the light bars on," she says. "We don't pay our folks to do that kind of thing."

Fischer's first task was to clear out several of the old trucks. "There's not a whole lot of value in those vehicles at auction or anywhere else, so we held our own little auction right here, for our employees," she says. "We did much better than we would have if we tried to sell them through an auction or through a broker."

"We left the bodies on all but one," Christner adds. "One employee had plumbers in the family, so they're now using it as a work truck."

In her search for a long-term solution, Fischer found a car guy: Jeff Barron, a veteran lessor and president of San Francisco-based Ellis Brooks Leasing Inc. Barron took on the challenge of remobilizing his first humane society.

"I looked at it as an opportunity to learn about a niche market," he says. "I've never dragged a dead deer off the highway or pulled a kitten out of a tree; but, as an interested third party, I can ask a lot of questions."

[PAGEBREAK]With so many of Christner's rescue vehicles at the end of their lifecycle, he and Fischer asked Barron whether purpose-built vans were a reasonable alternative to trucks.

"They really wanted to go the van route. They have rain four or five months out of the year and wanted to stay out of the elements," Barron says. "But there are a lot of companies that do bodies, far fewer that do the vans."

Barron consulted with other Bay Area humane societies, and they pointed him to Warsaw, Ind.-based Mavron Inc., a builder that specializes in animal - and prisoner - transport.

"It just clicked," Barron says. "We were able to do everything [by sending] photographs and PDFs and engineering drawings back and forth between the people at PHS, the technical guy at Mavron and myself."

Christner also was impressed. Starting with Mavron's ADL-9 (as in nine animal compartments) platform, he and Barron were able to customize the setup to fit everything from collapsible cat cages to an extra lockbox for pharmaceuticals. Better yet, they were delivered with everything in place but graphics and a radio.

"We placed some of those vehicles in service immediately," Christner says. "They had the light bars, they had the lockboxes; basically, they were ready to go."

The early returns promised long-term savings at the pump, as well. "They're more economical than the trucks. They didn't have the exact same carrying capacity, so there was a little bit of a trade-off," he adds.

On the financial side, Fischer took Barron's advice and switched to open-end leases. The advantage? No more mileage or wear-and-tear penalties at end of cycle, and PHS/SPCA will have the opportunity to gauge the resale market before deciding whether to part with the vans.

The unknown for both sides is whether the organization, which became accustomed to swapping still-serviceable bodies to new chassis, can repurpose the vans' custom-built kennels and compartments.

"They're two years into a five-year lease, so we'll find out in three years," Barron says. "In theory, the cages can be recycled and placed into new vans, if the shell is the same."

Other challenges lie ahead for the organization, but Fischer is confident that, with the help of their new partner, they're ready.

"That's where Jeff Barron really helps us a lot," she says. "He weighs in and gives us solid advice on what to do and whether it's worth it. Using the leasing company saves us the cost of hiring a fleet manager."

Sidebar: PHS/SPCA By the Numbers

"Most of their time is spent behind the wheel," he says. "It might take you five or 10 minutes to pick up a dog and 20 minutes to get to the next call. When I was out on the road, in an eightand-a-half-hour day, I could spend five hours driving."

Unlike the mobile clinic and adoption center, scaling back is never an option.

"That's emergency work. It has to be done," Debbie Fisher says.

"The officers can't do their work without the proper equipment, and that includes their vehicles."