FedEx Corp. will expand its alternative-energy vehicle fleet with the first all-electric FedEx parcel delivery trucks in the United States. Four purpose-built electric trucks - optimized for electric operation from the wheels up - are slated to hit the road in the Los Angeles area starting in June 2010, joining more than 1,800 alternative-energy vehicles already in service for FedEx around the world.

Two of the new all-electric trucks come from Navistar, and are being assembled in Indiana. These are based on the Modec design already operated by FedEx in Europe. Ten such Modec vehicles serve FedEx routes in London and five more are on order for Paris.

Another pair of electric vehicles is being purchased from a different manufacturer for delivery to the Los Angeles area later in 2010. Both sets of electric vehicles are designed with a range that allows many FedEx Express couriers to make a full eight-hour shift of deliveries before their vehicles need recharging.

To promote the addition of all-electric trucks to its fleet, FedEx will use the prototype vehicle from Navistar in the "Charge Up Route 66" tour. The vehicle will be operated for FedEx customers, employees, and local officials in several stops along historic Route 66 between Chicago and Los Angeles. 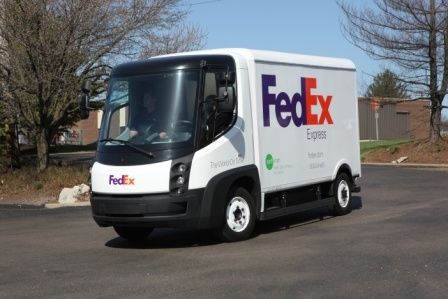 Once in California, the Navistar electric truck will be demonstrated at the FORTUNE Brainstorm Green conference, an environmental leadership event scheduled April 12-14 and featuring a presentation by Mitch Jackson, vice president, environmental affairs and sustainability, FedEx Corp. To track the vehicle's route, visit http://www.fedex.com/electric.

"Electric trucks are still in their infancy, but we think they have a bright future in the mix of alternative energy vehicles," Jackson said. "Reliability and maintainability is critical for FedEx because of our commitment to superior customer service, so we'll be giving these trucks a real workout, helping the manufacturers refine their future offerings.

"Down the road, we see the possibility of charging electric vehicle fleets with low- or zero-emission electricity generated on site by such innovations as solar electric arrays, like those at FedEx locations in California, New Jersey and Germany, or the Bloom Energy Server, another new technology we're helping to pioneer through evaluating it at our solar-powered hub in Oakland."

By the end of June, the FedEx alternative energy fleet will grow to 1,869 vehicles. Beyond the nine new electric trucks to be deployed in Los Angeles and Paris, FedEx has purchased 10 additional hybrid-electric vehicles that will be added to its California fleet throughout the spring, based in Oakland.

FedEx currently operates the largest hybrid fleet in the transportation industry, along with one of the largest alternative energy vehicle fleets, and is committed to improving its overall vehicle fuel efficiency 20 percent by 2020.