The small, Tier 2 automakers, such as Mazda and Hyundai, are slowly gaining fleet and commercial market share from the top Detroit and Asian brands, according to data from CNW Research.

In January, the Big Six - General Motors, Ford, Chrysler, Toyota, Honda and Nissan - held 73.2 percent of all fleet and commercial sales. By July, their collective market share shrank to 64.7 percent and is expected to decline this month. 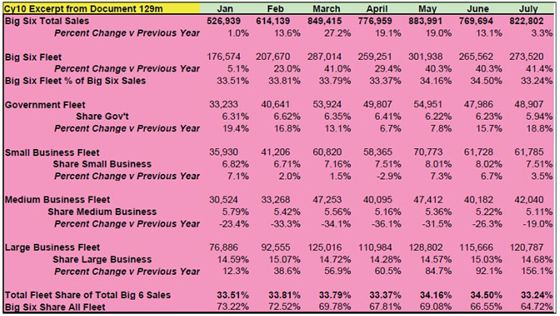 Nearly all automakers are approaching small and large companies, which now have tighter budgets and resources, to purchase once unthought-of brands for business use because the profit margins are better compared to retail sales, according to CNW's Art Spinella.

"The industry has slashed production and other costs dramatically, and commercial/fleet sales have become incrementally profitable," Spinella wrote.

In addition to better profit, automaker have less to lose with fleet vehicles as current at-risk programs have shifted responsibility of end-of-term value on fleets instead of manufacturers.